André Tamers was born in Venezuela but grew up mostly between France and the U.S and spent some years living in Spain before starting De Maison Imports in 1993.

When he returned stateside, he chose to make his home in North Carolina after driving up and down the coast with his wife, and deciding that this was where they should raise their family.

André and his wife really liked the pace and the culture of North Carolina and saw an opportunity to build their business here and for growth in the market for European wines.  Over the years, they have enjoyed seeing the gastronomic and wine scene develop in NC. By importing and sharing wines from the European producers they are passionate about, they have gotten to be a part of this. 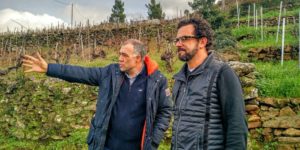 After moving to Chapel Hill, North Carolina, André  slowly assembled the now nationally celebrated portfolio,De Maison Selections, from the little-known producers that he discovered during his earlier travels. He travels back to Spain and France five to six times a year to maintain relationships with his producers and to seek out new partnerships or projects, and comes to Charlotte about once a year, to participate in events with Foxcroft.

André’s enthusiasm and passion for the wines of Spain and France is contagious – hearing him talk gets us excited to drink the wines, and the quality in the bottle backs it up every time.  This is why we feel privileged to get to host dinners with De Maison Selections and André annually at Foxcroft Wine Co.
In fact, our next dinner with André and De Maison Selections is coming up soon, on August 6th!  If you haven’t yet had the opportunity to taste the wines from the de Maison portfolio or to meet André and hear his stories, these annual dinners are a great chance to do so.

Clos des Papes is one of the original vineyards not only in Chafteaunuft de Pape, butRhone Valley as well.

An intrinsic part of the Chateauneuf du Pape landscape, Clos des Papes has a history that dates back to 1896. The Avril family goes back farther still, with historical records from the 1700s making reference to members of the clan acting as treasurers and consuls in the area.
The estate was founded by the first Paul Avril, who was a key player in the official creation of the Chateauneuf du Pape appellation, devising appellation rules that were the first of their kind in France.
The business passed down through generations – including further Pauls – before coming to Paul Vincent Avril (who unsurprisingly goes by the name Vincent), who began working at Clos des Papes in 1988, after training at a number of other wineries, including Mouton Rothschild in Bordeaux.
The vineyard consists of 35 hectares spread across 24 different parcels of land, so winemaking here is not without its complications. However, Vincent is something of a modern traditionalist, choosing to destem grapes, seek out low yields and avoid filtering, yet eschewing new oak and rejecting the idea of producing a high-end cuvee, which, he says, would harm his main wine, which has been in production for more than a century.
The 2019 Vintage of Chafteaunuf du Pape
Decanter’s Matt Walls found the 2019 vintage in Châteauneuf-du-Pape to be “exceptional in its own way, combining elegance with power, and excelling over neighbouring appellations.”
JOIN OUR INNER CIRCLE

Be the ﬁrst to know about our special events and offers.

Be the first to know about our special events and offers.