The seed for a career in wine was planted squarely in Bourbon country of Lexington, Kentucky. While waiting tables to put himself through school, Ken was exposed to fine wines from regions around the world. The passion became a vocation when Ken left the Bluegrass State to attend enology and viticulture classes at UC-Davis. Eight years were spent winemaking for Ventana Vineyards, Chalone and Talbott Vineyards in Monterey County. Friends from the Willamette Valley piqued Ken’s interest in the region when they would visit, and a trip to the Dundee Hills in 1976 convinced him that this was where the finest Pinot noir in North America was being grown.
In 1986, with family, belongings and 10 barrels in tow, Ken moved to McMinnville and started Panther Creek Cellars.  His concept of focusing on vineyard-designate bottling began during those years at Panther Creek and was cemented as a core philosophy in 1994 when Ken Wright Cellars was founded in historic downtown Carlton. Ken now makes single- vineyard bottlings from 13 vineyard sites in the Northern Willamette Valley. Ken has been instrumental in organizing the six new American Viticultural Area (AVA)’s in the Northern Willamette Valley that define in detail the distinct growing areas within the region; he wrote the proposition for the Yamhill-Carlton AVA and served as the association’s first President.
Ken’s accomplishments have been recognized over and over throughout the years. Ken Wright Cellars wine has received 111 scores of 90 and above in the Wine Spectator and Wine Enthusiast, and they continue to year after year. Ken was featured as the first Oregon winemaker on the cover of the Wine Spectator, in the May 2015 issue, with a 9-page article on his lifetime achievements in the Oregon Pinot Noir industry and his local philanthropies. Read full Wine Spectator Article
As Carson Wright explains:
“As Ken’s youngest son I spent a childhood working in the vineyard and winery at KWC. As part of the original cellar and vineyard crews, which in many cases were my friends and I, I have many great memories. It was exciting to grow up seeing and participating as both the Oregon wine industry and my Dad’s career from Panther Creek to
KWC grew into what it is today.”

(Final ticket price will include 20% gratuity)
Sold Out

We will do our best to accommodate seating requests.

Foxcroft Wine Co. will take every step possible to avoid charging for canceled reservations. However, a phone call only takes a moment. Kindly plan appropriately and honor our commitment to each other.

The following fees will apply upon notification of cancellation: 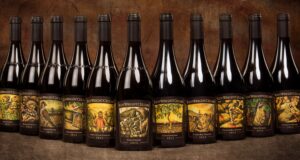